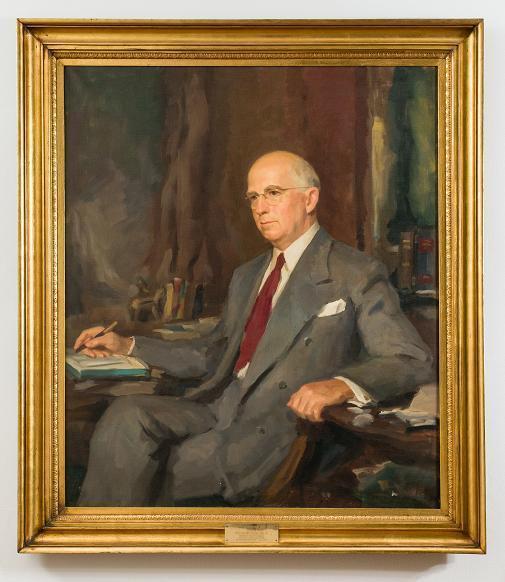 Thomas Callendine Boushall: (1894-1992)   was a son of Joseph Dozier Boushall and Mattie Callendine Heck. He was born: March 28, 1894 In Raleigh, Wake County, North Carolina, USA. He graduated from the University of North Carolina.

In 1915, Thomas became a banker and civic leader. In 1917-18 T.C. Boushall was working at The National City Bank of New York on Wall Street in New York City at the age of 26 and he was single.  Several years later he married Marie Libby and had a daughter named Frances who was born in 1924. In the 1930s and 40s T.C. Boushall and his family lived in the Tuckahoe District of Henrico County, Va. In 1942 Mr. Boushall was working at The Morris Plan Bank of Virginia at 8th & Main in Richmond; Va.  He lived at 24 Rio Vista Road, Richmond, VA 23219

T. C. Boushall was a member of the Richmond School Board from 1946-54 and was (Vice Chairman 1950-54). He was the founder of the Morris Plan Bank (forerunner of Signet). Mr. Boushall also served on the State Board of Education and was instrumental in founding WCVE-TV, and he is credited with pioneering the Adopt-A-School program in Richmond. He served as a member of the Education Committee of the United States Chamber of Commerce.

Thomas C. Boushall, was a member of the School Board from 1946-54 (Vice Chairman 1950-54) and founder of the Morris Plan Bank (forerunner of Signet). Mr. Boushall also served on the State Board of Education, was instrumental in founding WCVE-TV, and is credited with pioneering the Adopt-A-School program in Richmond. He served as a member of the Education Committee of the United States Chamber of Commerce and was credited with contributing greatly to the Chamber's 1954 publication, Education--An Investment in People. Since 1986, Signet has awarded annually a $4,000 Thomas C. Boushall Scholarship to a Richmond high school senior. Signet Bank presented a portrait of Mr. Boushall to the school in February 1992; Mr. Boushall died in May 1992 at the age of 98.

Prior to 1983, City Council appropriated funds four times for a middle school on the South Side. Bonds were sold in 1971, 1979, and 1981; $7 million of the $7.8 million bond sales was transferred to other City projects. The original location was in the vicinity of George Wythe (1961-62), later planned for Jahnke & Blakemore Roads (1980). In 1983, City Council appropriated funds for the construction of Boushall Middle School at Walmsley Boulevard & Hopkins Road.

A ground-breaking ceremony was held on May 15, 1985; the school was dedicated on November 16, 1986. When it opened in 1986, Boushall was the first new building in the system since Overby-Sheppard was built in 1977. The two-story brick masonry structure includes a centrally located media center, a cafeteria, and provisions for handicapped students.

In 1989, Boushall was awarded "Vanguard" middle school status by the State Department of Education, in recognition of its innovative approaches to program design and instruction. Boushall also operates as a model middle school.

Click here for the summary report on T. C. Boushall Middle School from the Virginia Department of Education.  This report includes statistics on enrollment, assessments and other information.